跳至主要內容
Please click the following link and see the attachment.請見以下連結及附件。 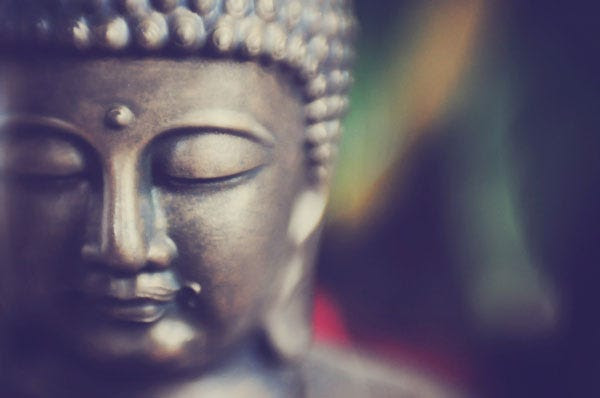 Who Is His Holiness Dorje Chang Buddha III?

Five Key Points about the Buddhist Spiritual Leader
Buddhism is among the largest religions in this world. The original founder of Buddhism and the religion’s highest spiritual leader in the universe is Dorje Chang Buddha. He is worshiped by all major sects and schools of Buddhism as the earliest primordial Buddha.
Buddhists belong to a religious belief that understands the universe’s nature of no-birth and no-annihilation and human beings’ original nature of true such-ness are one and the same. They believe in the cycle of transmigration driven by the law of cause and effect. They believe that after one’s biological death, the spirit or soul will incarnate and be reborn into a new being. In the case of the primordial Buddha, He has now incarnated to this world for the third time as His Holiness Dorje Chang Buddha III. The highest spiritual leader in Buddhism alive today currently lives in the United States of America.
His Holiness Dorje Chang Buddha III is not one who seeks publicity. Even when awarded the Presidential Gold Award, the Dr. Martin Luther King Legacy Award for International Service and Leadership, and many other prestigious prizes, He did not attend the award ceremonies to receive the prizes in person. He is well known for loving-kindness and compassion, and has made a vow of only helping others and never accepting any offerings from anyone.
However, His accomplishments and accolades are widely-reported. The following are five of the most interesting things that you may not have known about His Holiness the Buddha: 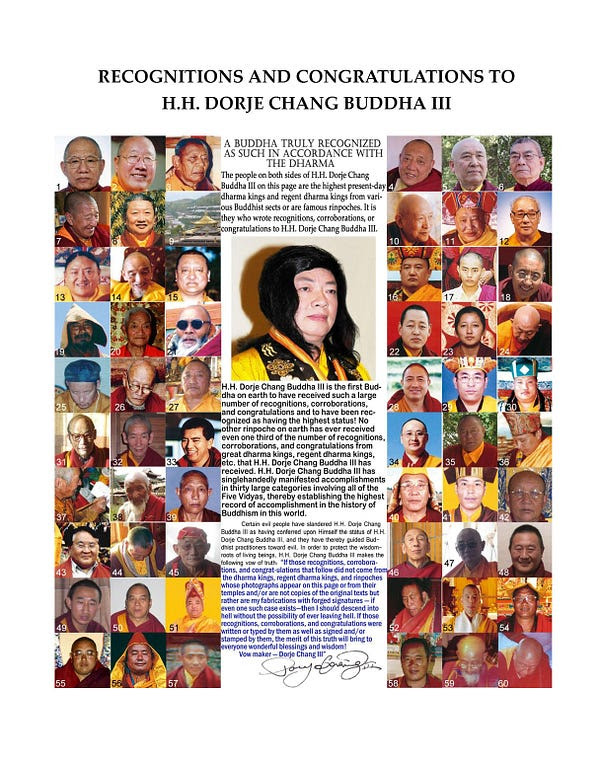 1. Buddhism classifies all material and spiritual matters and knowledge in the universe into five aspects. Complete mastery of these five aspects is called having realized the Five Vidyas (vidya is a Sanskrit word meaning brightness). Buddhas and Bodhisattvas must possess the Five Vidyas. The Five Vidyas include: the Vidya of Casuality, the Vidya of Healing, the Vidya of Sound, the Vidya of Craftsmanship, and the Vidya of Inner Realization. Looking through the entire history of Buddhism, His Holiness Dorje Chang Buddha III is the first holy one to perfectly manifest real accomplishments in the Five Vidyas, meeting the highest standard of Buddhism. For this reason and more, His Holiness Dorje Chang Buddha III is the one and only individual in history to receive recognitions and corroborating recognitions from over 60 of the highest present-day dharma kings and regent dharma kings from various Buddhist sects.
2. His Holiness Dorje Chang Buddha III was awarded the Top Honor Prize during the World Peace Prize Ceremony at the U.S. Capitol on June 14, 2011. The World Peace Prize is an initiative to promote world peace and understanding between different nations, ethnicities, cultures and religions. His Holiness Dorje Chang Buddha III was recognized for receiving this Top Honor Prize by the 112th Congress in U.S. Senate Res. 614, commending His Holiness the Buddha for his role in advancing peace, justice and inter-religious collaboration.
3. His Holiness Dorje Chang Buddha III has long been an internationally renowned artist. His paintings are not limited by subject or themes and are of many types, from water-ink paintings to oil paintings. Specifically, the subject matters include human figures, animals, flowers and birds, mountain and water scenes, fish, insects, and so on. Within the wide range of styles, there is fine brushwork, drawing with lines and strings, splash-ink, bold freehand brushwork, small freehand brushwork, and others. Altogether, He created 16 unique painting styles or schools, representing an unprecedented pioneering achievement in the history of art. His paintings are on permanent exhibition at the International Art Museum of America in San Francisco, the H.H. Dorje Chang Buddha III Cultural and Art Museum in Los Angeles County, and other art museums. His Holiness Dorje Chang Buddha III’s paintings are extremely valuable and rare. As early as in 2000, His artworks were sold for more than two million U.S. dollars each. He became the artist whose paintings commanded the highest prices compared to the prices for paintings created by all ancient and modern Chinese artists. Last March, an ink painting of His was sold at the New York Spring Auction for $16.5 million, which was the highest price realized at the 2015 Spring Auction of all artworks by ancient and modern artists worldwide. He is the world’s first inventor to create a class of artworks that cannot be duplicated by anyone or with any method — Yun Sculpture. Only after that, the world now has un-duplicable artworks. Experts predict that His paintings will become increasingly valuable as His Holiness plans to focus solely on Buddhist activities. 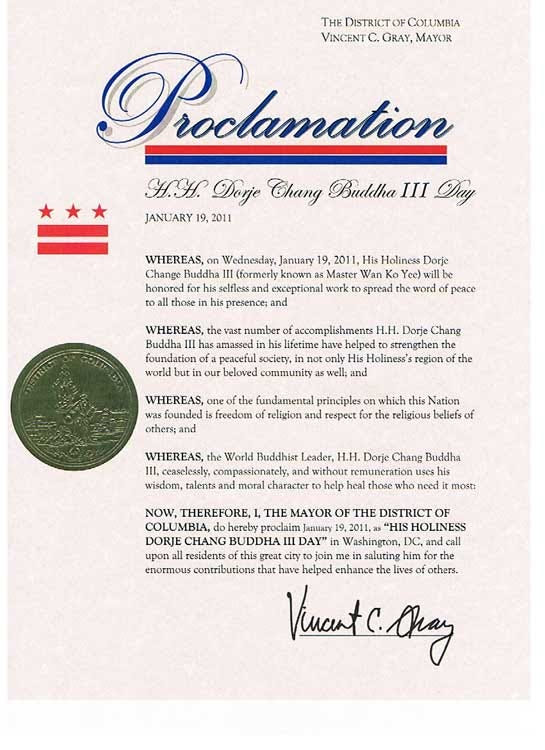 4. In 2011, the then Mayor of Washington, D.C., Vincent Gray, proclaimed January 19th as “H.H. Dorje Chang Buddha III Day.” The mayor called on D.C. residents to join him in saluting “His selfless and exceptional work to spread the word of peace to all those in His presence.” The Unites States Postal Service also issued a commemorative cover in celebration of “His Holiness Dorje Chang Buddha III Day.”
5. His Holiness Dorje Chang Buddha is a Fellow of Britain’s Royal Academy of Arts, making Him the first internationally distinguished artist appointed to a Fellowship in the Academy’s history of more than 200 years. The title of Fellow was awarded by the Academy’s President, Phillip King, at a ceremony in the British Embassy in Washington.
Unless you are an astute follower of Buddhism, you may not have known that His Holiness Dorje Chang Buddha III has been recognized as the third incarnation of the original Buddha. His accomplishments clearly transcend religion, healing, art, philosophy, and literature. He continues to devote His time to a wide scope of cultural, religious, and various other domains directed at helping people in communities across the globe. His Holiness Dorje Chang Buddha III has made the following vow: “I will bear all of the karmic offenses committed by living beings, and I will give everyone all of the good karma and merit that I plant.” His Holiness the Buddha has been executing it exactly as is.
Steven Meyers received his bachelor’s degree in Chinese language from Brown University, where he graduated magna cum laude. After graduating, Mr. Meyers spent a year at the Stanford Center in Taiwan furthering his study of the Chinese language. Later, he received a Juris Doctor degree from the University of Michigan and is now an attorney licensed to practice law in the state of California. He has been providing legal advice to California non-profit corporations since 1996. His current focus is translating Buddhist material from Chinese into English.
Buddhism   Spirituality     Buddha
Facebook Comments Box